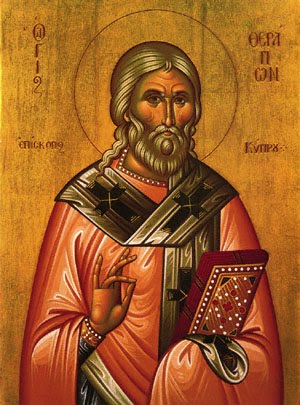 The Hieromartyr Therapontus , Bishop of Sardi, suffered for Christ in the third century. In fulfilling his priestly service, St. Therapontus enlightened many of the pagan Greeks with the light of the Christian Faith and baptized them. For this, he was brought before the governor Julian and put on trial where he fearlessly declared himself a Christian. St. Therapontus was thrown into prison where he was tortured. These torments did not break the saint’s valiant confession of faith. He was led off in chains to the city of Sinaion in Phrygia, and then to Ancyra. In these cities he was tortured again. They took him to the River Astala, where they stretched him naked upon the ground, fastened to four stakes, and fiercely beat him. After this torture, St. Therapontus was taken to the outskirts of the Satalina diocese, part of the Sardis metropolinate, and here after long beatings, the saint ended his martyric contest. The stakes to which the saint was toed, and which were soaked with his blood, put forth green shoots and grew into large trees. The leaves of these trees were found to have curative powers, and many people received healing through them.

O holy priest-martyr Therapontus, you lent yourself to the apostles’ way of life and succeeded them on their throne. Inspired by God, you found the way to contemplation through the practice of virtue. Therefore, you became a perfect teacher of truth, fighting for the faith unto the shedding of your blood. Intercede with Christ our God that he may save our souls.

Having suffered under the law, O Therapontus, you became a true pastor and martyr. You were a champion for God, and so we come to you for favors. Ease our souls of uncontrollable passion and beseech Christ who loves us in his mercy.

In those days, while Apollos was in Corinth, Paul passed through the interior of the country  and came to Ephesus. There he found some disciples to whom he put the question, “Did you receive the Holy Spirit when you became believers?” They answered, “We have not yet heard that there is a Holy Spirit.” “Well, how were you baptized?” he persisted. They replied, “With the baptism of John.” Paul then explained, “John’s baptism was a baptism of repentance. He used to tell the people about the one who would come after him whom they were to believe- that is Jesus.” When they heard this, they were baptized in the name of the Lord Jesus. As Paul laid his hands on them, the Holy Spirit came down on them and they began to speak in tongues and to utter prophecies. There were in the company about twelve men in all. Paul entered the synagogue, and over a period of three months debated fearlessly, with persuasive arguments, about the Kingdom of God.

The Lord said to his disciples: “Do not let your hearts be troubled. Have faith in God and faith in me. In my Father’s house there are many dwelling places; otherwise, how could I have told you that I was going to prepare a place for you? I am indeed going to prepare a place for you, and then I shall come back to take you with me, that where I am you also may be. You know the way that leads where I go.”

“Lord,” said Thomas, “we do not know where you are going. How can we know the way?” Jesus told him: “I am the way, and the truth, and the life; no one comes to the Father but through me. If you really knew me, you would know my Father also. From this point on you know him; you have seen him.”