Nov. 08 The Synaxis of the Archangel Michael and all Angelic Powers 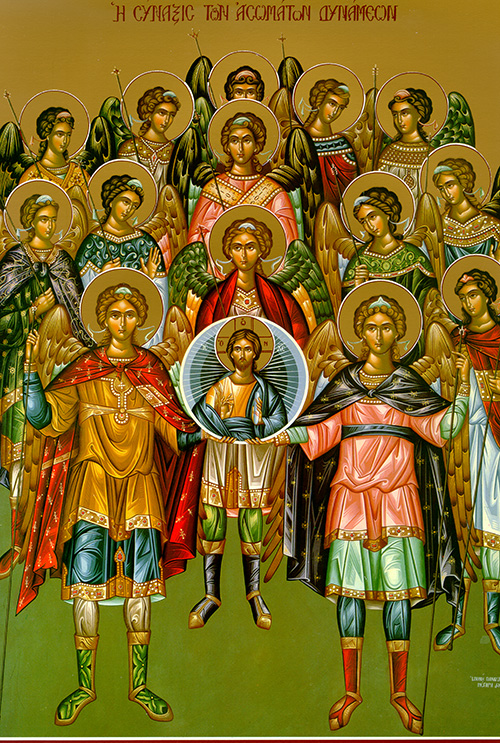 Leaders of the heavenly armies, although we are unworthy, we always beseech you to fortify us through your prayers and to shelter us beneath the wings of your sublime glory. Watch over us who bow to you and cry out fervently: Deliver us from danger, for you are the commanders of the powers on high.

Leaders of God’s armies and ministers of divine glory, commanders of angels and guides of mortals, plead on our behalf for what we need and for great mercy; since you are the leaders of the heavenly hosts.

Brothers and sisters: If the word spoken through angels stood unchanged, and all transgressions and disobedience received its due punishment, how shall we escape if we ignore a salvation as great as ours? Announced first by the Lord, it was confirmed to us by those who had heard him. God then gave witness to it by signs, miracles, varied acts of power, and distribution of the gifts of the Holy Spirit as he willed.

For he did not make the world to come–that world of which we speak– subject to angels. Somewhere this is testified to, in the passage that says: “What is man that you should be mindful of him, or the son of man that you should care for him? You made him for a little while a little lower than the angels: you crowned him with glory and honor, and put all things under his feet.” In subjecting all things to him, God left nothing unsubjected. At present we do not see all things thus subject, but we do see Jesus crowned with glory and honor because he suffered death: Jesus, who was made for a little while lower than the angels, that through God’s gracious will he might taste death for the sake of all men. Indeed, it was fitting that when bringing many sons to glory God, for whom and through whom all things exist, should make their leader in the work of salvation perfect through suffering.

Brothers and sisters: You became imitators of us and of the Lord, receiving the word despite great trials, with the joy that comes from the Holy Spirit. Thus you became a model for all the believers of Macedonia and Achaia. The word of the Lord has echoed forth from you resoundingly. This is true not only in Macedonia and Achaia; throughout every region your faith in God is celebrated, which makes it needless for us to say anything more. The people of those parts are reporting what kind of reception we had from you, and how you turned to God from idols, to serve him who is the living and true God and to await from heaven the Son he raised from the dead–Jesus, who delivers us from the wrath to come.

The Lord said, “Who in your opinion is that faithful, farsighted steward whom the master will set over his servants to dispense their ration of grain in season? That servant is fortunate whom his master finds busy when he returns. Assuredly, his master will put him in charge of all his property. But if the servant says to himself, ‘My master is taking his time about coming,’ and begins to abuse the housemen and servant girls, to eat and drink and get drunk, that servant’s master will come back on a day when he does not expect him, at a time he does not know. The master will punish him severely and rank him among those undeserving of trust. The slave who knew his master’s wishes but did not prepare to fulfill them will get a severe beating, whereas the one who did not know them and who nonetheless deserved to be flogged will get off with fewer stripes. When much has been given a man, much will be required of him. More will be asked of a man whom more has been entrusted.”