Nov. 09 The Holy Martyrs Onesiphorus and Porphyrius; Our Venerable Mother Matrona; The Venerable Theoctista of Lesbos 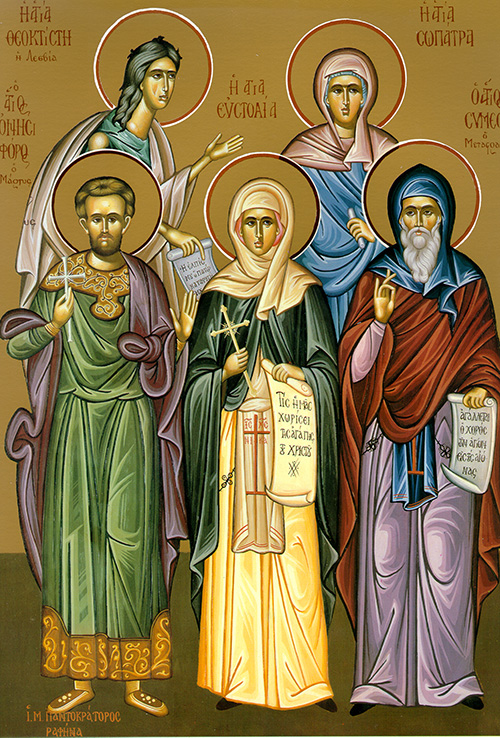 The holy martyrs Onesiphorus and Porphyrius of Ephesus suffered during the persecution of Christians by emperor Diocletian (284-305). They beat them and burned them. After this, they tied the saints to wild horses, which dragged them over stones, after which the martyrs died. Believers gathered the remains of the saints and reverently buried them.

Our venerable mother Matrona was from Perga in Pamphylia. She fled a horrible marriage by dressing in men’s clothing and, under the name of Babylas, lived in a monastery in Constantinople. She went from monastery to monastery to evade her husband. She lived the monastic life for seventy-five years and fell asleep in the Lord in the year 492.

The venerable Theoctista of Lesbos became a nun at the age of seventeen. Saracens descended on the island and enslaved all the people they captured. Theoctista escaped and lived in an abandoned church on the island of Paros for thirty-five years. She fell asleep in the Lord in the year 881.

In you, O mother, the divine image was strictly preserved; taking up your cross, you followed Christ. You taught us by example how to spurn the flesh, for it passes away, and how to care for the soul, which is immortal. Therefore, O venerable Matrona, your soul rejoices with the angels.

O venerable Matrona, for the love of the Lord, you rejected longing for rest; you gave light to your soul through fasting; you trampled on beasts by your might, but you destroy the wiles of satan through your prayers.

Brothers and sisters, you know well enough that our coming among you was not without effect. Fresh from the humiliation we had suffered at Philippi – about which you know – we drew courage from our God to preach his good tidings to you in the face of great opposition. The exhortation we deliver does not spring from deceit or impure motives or any sort of trickery; rather, having met the test imposed on us by God, as men entrusted with the good tidings, we speak like those who strive to please God, “The tester of our hearts,” rather than men.

We were not guilty, as you well know, of flattering words or greed under any pretext, as God is our witness! Neither did we seek glory from men, you or any others, even though we could have insisted on our own importance as apostles of Christ.

On the contrary, while we were among you we were as gentle as any nursing mother fondling her little ones. So well disposed were we to you, that we wanted to share with you not only God’s tidings but our very lives, so dear had you become to us.

The Lord said, “When mush has been given a man, much will be required of him. More will be asked of a man to whom more has been entrusted. I have come to light a fire on the earth. How I wish the blaze were ignited! I have a baptism to receive. What anguish I feel till it is over! Do you think I have come to establish peace on earth? I assure you, the contrary is true; I have come for division. From now on, a household of five will be divided three against two and two against three; father will be split against son and son against father, mother against daughter and daughter against mother, mother-in-law against daughter-in-law, daughter-in-law against mother-in-law.”

Jesus said to the crowds: “When you see a cloud rising in the west, you say immediately that rain is coming–and so it does. When the wind blows from the south, you say it is going to be hot– and so it is. You hypocrites! If you can interpret the portents of earth and sky, why can you not interpret the present time? Tell me, why do you not judge for yourselves what is just? When you are going with your opponent to appear before a magistrate, try to settle with him on the way lest he turn you over to the judge, and the judge deliver you up to the jailer, and the jailer throw you into prison. I warn you, you will not be released from there until you have paid the last penny.”