Nov. 10 The Holy Apostles Erastus, Olympas, Rodion, and their Companions 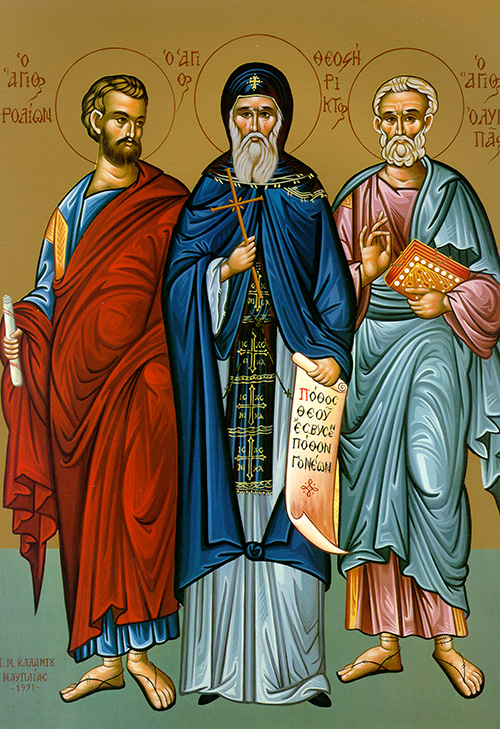 The holy apostles Erastus, Sosipater, Olympas, Rodion, Quartus, and Tertius were disciples of St. Paul. They all lived during the first century. The Apostle to the Gentiles speaks of them in the Epistle to the Romans, “And Erastus, the city treasurer, greets you, and Quartus, a brother” (Rom 16:23). St. Sosipater, a native of Achaia, was Bishop of Iconium, where he also died. St. Paul mentions him in Romans 16:21. St. Olympas was mentioned by the holy apostle Paul (Rom 16:15). He was also a companion of the Apostle Peter. St. Rodion (Herodion), was a kinsman of the Apostle Paul (Rom 16:11), and left the bishop’s throne at Patras to go to Rome with apostle Peter. Saints Rodion and Olympas were beheaded on the very day and hour when St. Peter was crucified. St. Quartus endured much suffering for his piety and converted many pagans to Christ, dying peacefully as a bishop in the city of Beirut. St. Tertius is mentioned in the Epistle to the Romans, “I, Tertius, who wrote this epistle, salute you in the Lord” (Rom 16:22). St. Tertius, to whom St. Paul dictated the Epistle to the Romans, was the second Bishop of Iconium, where he also died.

You enlightened your mind with light divine. You destroyed deceptive arguments with true wisdom, and having fished for all the Gentiles, O glorious apostles, you brought them to the Master, teaching them to glorify the Divine Trinity.

Brothers and sisters, you must recall our efforts and our toil: how we worked day and night all the time we preached God’s good tidings to you in order not to impose on you in any way. You are witnesses, as is God himself, of how upright, just, and irreproachable our conduct was toward you who are believers. You likewise know how we exhorted everyone of you, as a father does his children — how we encouraged and pleased with you to make your lives worthy of the God who calls you to his kingship and glory. That is why we thank God constantly that in receiving his message from us you took it, not as the word of men, but as it truly is, the word of God at work within you who believe. Brethren, you have been made like the churches of God in Judea which are in Christ Jesus.