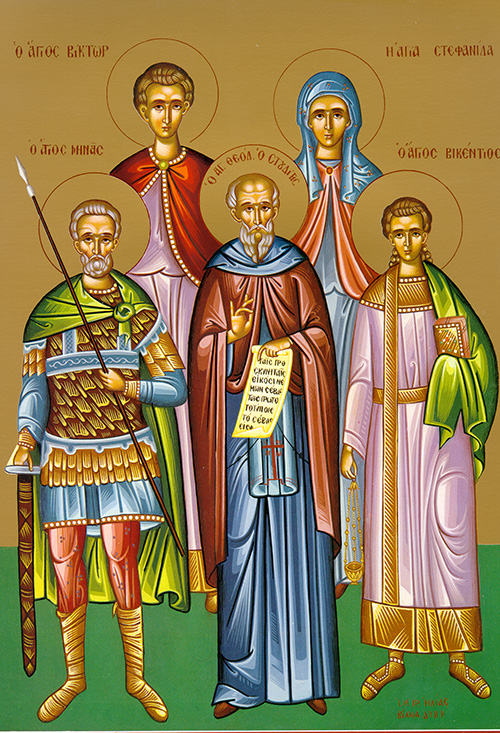 The holy martyr Menas was a soldier from Egypt. When ordered to worship pagan idols and arrest and persecute Christians, St. Menas refused and left the army to go into the wilderness and live an ascetic life. At the age of fifty, St. Menas had a vision that he regarded as a sign to follow the path to martyrdom. He sought out a pagan festival and disrupted it, confessing the One True God, and our Lord Jesus Christ. He was arrested, tortured, and eventually beheaded in 304. His relics were gathered and hidden until the persecution was over. They were brought to Egypt and placed in a church dedicated to the saint where they continue to work miracles for those who entreat him with faith and love.

The holy martyr Victor was a soldier, during the reign of the emperor Marcus Aurelius the Philosopher (161-180). He was tortured, but he came through all the torments unharmed. Through St. Victor’s prayers, blind soldiers suddenly received their sight. The torturer ordered that the holy Martyr Victor be beheaded. Hearing the commander’s order, St. Victor told his executioners that they would all die in 12 days, and that the commander would be captured by the enemy in 24 days. As he foretold, so it came to pass.

The holy martyr Vincent was a deacon ordained by Bishop Valerian of Augustopolis (now Saragossa, Spain). He was an eloquent orator, and preached in church and among the people. St. Vincent was arrested with his bishop during the persecution under the emperor Diolcatian. The holy deacon underwent many torments, but came through all of them, and exhausted his torturers. After the tortures they threw the martyr back into prison. That night the astonished guard heard him singing Psalms, and saw an unearthly radiant light in the prison. The next morning the holy martyr was condemned to be burned on a gridiron. Christians took the saint’s body and buried it with reverence. This occurred in the year 304.

The holy martyr Stephanis was the young Christian wife of one of the tortures of the holy martyr Vincent. After she witnessed the miracles worked by the Lord through St. Vincent, Stephanis openly glorified Christ, for which she was condemned to a cruel death. She was 15 years old.

Our venerable father and confessor Theodore the Studite was hegumen of that monastery in Constantinople who suffered greatly for his defense of the cult of the holy icons. He was a wise organizer of monastic life, an inspired teacher of the Orthodox faith, and a great ascetic. He died in Constantinople in the year 826 and the age of 68.

O Lord, You have made those martyrs who shared in Your passion ornaments of glory for the world. Therefore, we have in them an invincible advocate.

Guide to Orthodoxy, teacher of piety and holiness, luminary of the world, inspired adornment of monks, O wise Theodore, harp of the Spirit, you enlightened all by your teachings; intercede with Christ our God to save our souls.

Christ our God summoned you from an earthly army, and enlisted you in the army of heaven, O martyr Menas. You have been given the untarnishing crown of the martyrs.

You surrounded yourself with every ascetic practice in order to protect your angelic life. With the grace of God you became like the angels. Together with them, O Theodore, never cease to intercede with Christ our God for the sake of all of us.

Brothers and sisters, you have been made like the churches of God in Judea which are in Christ Jesus. You suffered the same treatment from your fellow countrymen as they did from the Jews who killed the Lord Jesus and the prophets, and persecuted us. Displeasing to God and hostile to all mankind, they try to keep us from preaching salvation to the Gentiles. All this time they have been “filling up their quota of sins,” but the wrath has descended upon them at last.

Brethren, when we were orphaned by separation from you for a time – in sight, not in mind – we were seized with the greatest longing to see you. So we tried to come to you – I, Paul, tried more than once – but Satan blocked the way. Who, after all, if not you, will be our hope or joy, or the crown we exult in, before our Lord Jesus Christ at his coming? You are our boast and our delight.

At that time certain Pharisees came to Jesus. They said, “Go on your way! Leave this place! Herod is trying to kill you.” Jesus answered: “Go tell that fox, ‘Today and tomorrow I cast out devils and perform cures, and on the third day my purpose is accomplished. For all that, I must proceed on course today, tomorrow, and the day after, since no prophet can be allowed to die anywhere except in Jerusalem.’

“O Jerusalem, Jerusalem, you slay the prophets and stone those who are sent to you! How often have I wanted to gather your children together as a mother bird collects her young under her wings, and you refused me! Your temple will be abandoned. I say to you, you shall not see me until the time comes when you say, ‘Blessed is he who comes in the name of the Lord.’”