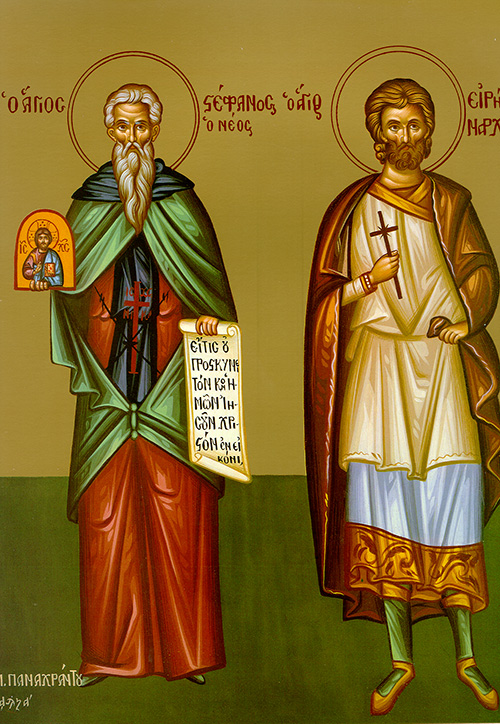 The holy venerable martyr Stephen the Younger was a monk and martyr, who, under Constantine Copronymus, was tortured by various punishments for the cult of sacred images and confirmed the Catholic truth by his shed blood. (767)

The holy martyr Irenarchus was a torturer in Sebaste in Armenia. He was converted to Christ by the steadfastness of Christian women martyrs. Under Diocletian the emperor and Maximus the governor, he was struck down with an ax in the 4th century.

At first you were radiant with the light of fasting, but now you are more brilliant with your martyr’s blood. You burnt off the fog of those who spoke heresy, and showed the true glory of the orthodox faith. You have been glorified as a divine witness to Christ, O holy martyr Stephen.

Your martyr, Irenarchus, O Lord our God, in his struggle received an incorruptible crown from You. With Your strength, he brought down the tyrants and broke the cowardly valor of demons. Through his prayers, O Christ our God, save our souls.

O lover of feasts, in our hearts let us faithfully praise in hymns the divine Stephen, servant of the Holy Trinity, for he has honored the beautiful icons of the Master and His Mother together now, let us who rejoice lovingly sing to him; rejoice, O ever-glorious father.

May you have an abundance of peace, O martyr, for you laid hold of the enemy. You defeated that army of spiritual deception by the power of divine grace. You endured the most terrible sufferings. Now we beseech you to deliver from all harm those who keep your memory, O Irenarchus.

I repeat the directions I gave you when I was on my way to Macedonia: stay on in Ephesus in order to warn certain people there against teaching false doctrines and busying themselves with interminable myths and genealogies, which promote idle speculations rather than that training in faith which God requires.

What we are aiming at in this warning is the love that springs from a pure heart, a good conscience, and sincere faith. Some people have neglected these and instead have turned to meaningless talk, wanting to be teachers of the law but actually not understanding the words they are using, much less the matters they discuss with such assurance.

At that time as Jesus approached the descent from Mount Olivet, the entire crowd of disciples began to rejoice and praise God loudly for the display of power they had seen, saying: “Blessed is he who comes as king in the name of the Lord! Peace in heaven and glory in the highest!”

Some of the Pharisees in the crowd said to Jesus, “Teacher, rebuke your disciples.” He replied, “If they were to keep silence, I tell you the very stones would cry out.”

Coming within sight of the city, Jesus wept over it and said: “If only you had known the path to peace this day; but you have completely lost it from view! Days will come upon you when your enemies encircle you with a rampart, hem you in, and press you hard from every side. They will wipe you out, and leave not a stone on a stone within you, because you failed to recognize the time of your visitation.”