Oct. 22 The Holy Bishop Abercius of Hieropolis, Equal to the Apostles, Wonder-worker; The Holy Seven Children of Ephesus 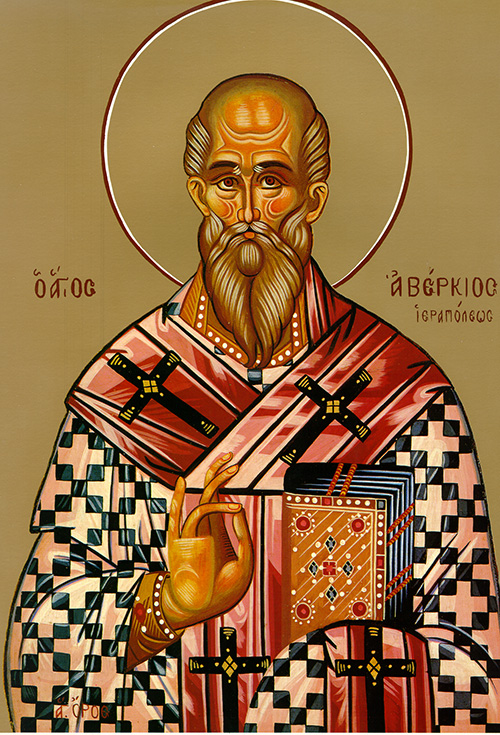 The holy bishop Abercius, equal to the Apostles and wonder-worker lived in the 2nd century in Hieropolis in Phrygia. St. Abercius prayed to the Lord for the conversion of all the pagans living in the city. He was visited by an angel that told him to destroy the idols in the pagan temple. St. Abercius then went out and denounced the failings of pagans. There, the pagan tried to seize him. There were 3 youths possessed by demons among the crowd, and St. Abercius expelled them by his prayers. This amazed the crowd, and they asked him to instruct them on the Christian faith. After this the saint went to the surrounding cities and villages, healing the sick and preaching the Kingdom of God. For many years he guarded the Church against heretics, he confirmed Christians in the Faith, he set the prodigal upon the righteous path, he healed the sick and proclaimed the glory of Christ. Because of his great works, St. Abercius is termed “Equal of the Apostles.” St. Abercius returned home to Hieropolis, where he soon rested from his labors. After his death, many miracles took place at his tomb.

The seven holy children of Ephesus: During the persecution of the emperor Decius, even young soldiers refused to sacrifice to idols. Tradition says that their names were: Maximilian, Iamblichus, Martinian, John, Dionysius, Exacustodianus, and Antoninus. In the year 250 they concealed themselves in caves outside Ephesus, and the emperor had them sealed into the cave to kill them. In the reign of the Christian emperor Theodosius the Younger (408-450), there arose a dispute about the veracity of the Christian teaching on the resurrection of the dead. The youths awoke, testified to the true teaching, and one week later died in the year 45.

You became a preacher of truth and a worker of miracles, a father of orphans and a support of the poor, a brave shepherd for your flock and a scourge to the demons. Protect those who cry out to you: O our father Abercius, pray to Christ our God that He may save our souls!

The young men who were resplendent at Ephesus, numbering seven in the radiance of the seven gifts of the Holy Spirit, have transcended corruption throughout long years, despite death, in a manner that surpasses our understanding. They confirm our faith in the resurrection of all so clearly that the faithful cry aloud, “Glory to Him who kept you incorrupt! Glory to Him who raised you! Glory to Him who overthrew contrary things through your example!

The Church of all the faithful honors you, Abercius, as a great priest, equal to the Apostles. Through your intercessions, keep this Church unconquered, undisturbed from all heresy and undefiled, O blessed father whom we praise for your countless miracles.

You glorified Your saints on earth, O Christ, before Your second and awesome Coming. By raising the youths so gloriously, You manifested the resurrection to those who did not know it. Revealing the flesh and clothing incorrupt, You moved the emperor to cry aloud, “You are indeed the Resurrection of the dead!”

Brothers and sisters, we do not wish to leave you in the dark about the trouble we had in Asia; we were crushed beyond our strength, even to the point of despairing of life. We were left to feel like men condemned to death so that we might trust, not in ourselves, but in God who raises the dead. He rescued us from that danger of death and will continue to do so. We have out our hope in him who will never cease to deliver us. But you must help us with your prayers, so that on our behalf God may be thanked for the gift granted us through the prayers of so many.

At that time Jesus entered Capernaum. A centurion had a servant he held in high regard, who was at that moment sick to the point of death. When he heard about Jesus he sent some Jewish elders to him, asking him to come and save the life of his servant. Upon approaching Jesus they petitioned him earnestly. They said, “He deserves this favor from you because he loves our people, and even built a synagogue for us.” Jesus set out with them. When he was only a short distance from the house, the centurion sent friends to tell him: “Sir, do not trouble yourself, for I am not worthy to have you enter my house. That is why I did not presume to come to you myself. Just give the order and my servant will be cured. I too am a man who knows the meaning of an order, having soldiers under my command. I say to one, ‘On your way,’ and off he goes; to another, ‘Come here,’ and he comes; to my slave, ‘Do this,’ and he does it.” Jesus showed amazement to the crowd which was following him to say, “I tell you, I have never found so much faith among the Israelites.: When the deputation returned to the house, they found the servant in perfect health.