Oct. 23 The Holy Apostle James, the Brother of the Lord in the flesh 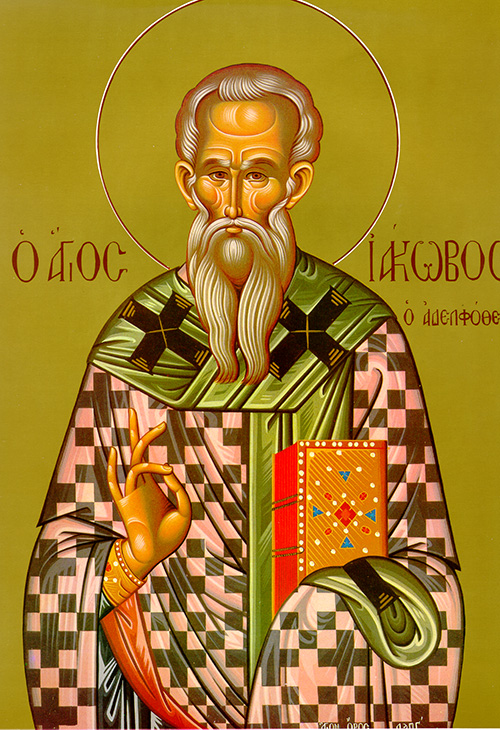 The holy apostle James, the brother of God, called the Just One, was the first to rule the Church in Jerusalem as bishop. Paul testifies that he was among the witnesses of the Resurrection (cf 1 Cor. 15:7). St. James presided over the Council of Jerusalem and his word was decisive (Acts 15). In his thirty years as bishop, St. James converted many of the Jews to Christianity. Annoyed by this, the Pharisees and the Scribes plotted together to kill St. James. They led the saint up on the pinnacle of the Jerusalem Temple and asked what he thought of Jesus. The holy Apostle began to bear witness that Christ is the Messiah, which was not the response the Pharisees were expecting. Greatly angered, the Jewish teachers threw him off the roof. The saint did not die immediately, but gathering his final strength, he prayed to the Lord for his enemies while they were stoning him. St. James’ martyrdom occurred about 63 A.D.

O righteous James, as a disciple of the Lord, you received the Gospel. As a martyr, you displayed an unyielding will. As a brother of the Lord, you have special power with Him. As a hierarch, you have the right of intercession. Intercede therefore with Christ God that He may save our souls.

When at the completion of time God the Word, the only-begotten Son of the Father, came down to us, He established you, divine James, as the first shepherd and teacher of Jerusalem, a faithful steward of the spiritual mysteries; therefore we all honor you, O apostle.

Brothers and sisters: I assure you, the gospel I proclaimed to you is no mere human invention. I did not receive it from any man, nor was I schooled in it. It came by revelation from Jesus Christ. You have heard, I know, the story of my former way of life in Judaism. You know that I went to extremes in persecuting the Church of God and tried to destroy it; I made progress in Jewish observance far beyond most of my contemporaries, in my excess of zeal to live out all the traditions of my ancestors.

But the time came when he who had set me apart before I was born and called me by his favor chose to reveal his Son to me, that I might spread among the Gentiles the good tidings concerning him. Immediately, without seeking human advisers or even going to Jerusalem to see those who were apostles before me, I went off to Arabia; later I returned to Damascus. Three years after that I went up to Jerusalem to get to know Cephas, with whom I stayed fifteen days. I did not meet any other apostles except James, the brother of the Lord.

I declare before God that what I have just written is true. Thereafter I entered the regions of Syria and Cilicia. The communities of Christ in Judea had no idea what I looked like; they had only heard that “he who was formerly persecuting us is not preaching the faith he tried to destroy,” and they gave glory to God on my account.

At that time, Jesus went to his native place and spent his time teaching them in their synagogues. They were filled with amazement, and said to one another, “Where did this man get such wisdom and miraculous powers? Isn’t this the carpenter’s son? Isn’t Mary known to be his mother and James, Joseph, Simon, and Judas his brothers? Aren’t his sisters our neighbors? Where did he get all this?” They found him altogether too much for them. Jesus said to them,” No prophet is without honor except in his native place, indeed in his own house.” And he did not work many miracles there because of their lack of faith.

The Lord told this parable: “Once there was a rich man who dressed in purple and linen and feasted splendidly every day. At his gate lay a beggar named Lazarus who was covered with sores. Lazarus longed to eat the scraps that fell from the rich man’s table. The dogs even came and licked his sores. Eventually the beggar died. He was carried by angels to the bosom of Abraham. The rich man likewise died and was buried. From the abode of the dead where he was in torment, the rich man raised his eyes and saw Abraham afar off, and Lazarus resting in his bosom.

“He called out, ‘Father Abraham, have pity on me. Send Lazarus to dip the tip of his finger in water to refresh my tongue, for I am tortured in these flames.’ ‘My child,’ replied Abraham, ‘remember that you were well off in your lifetime while Lazarus was in misery. Now he has found consolation here, but you have found torment. And that is not all. Between you and us there is fixed a great abyss, so that those who might wish to cross from here to you cannot do so, nor can anyone from your side to us.’

“‘Father, I ask you then,’ the rich man said, ‘send him to my father’s house where I have five brothers. Let him be a warning to them so that they may not end in this place of torment.’ Abraham answered, ‘They have Moses and the prophets. Let them hear them.’ ‘No, Father Abraham,’ replied the rich man. ‘But if someone would only go to them from the dead, then they would repent.’ Abraham said to him, ‘If they do not listen to Moses and the prophets, they will not be convinced even if one should rise from the dead.’”