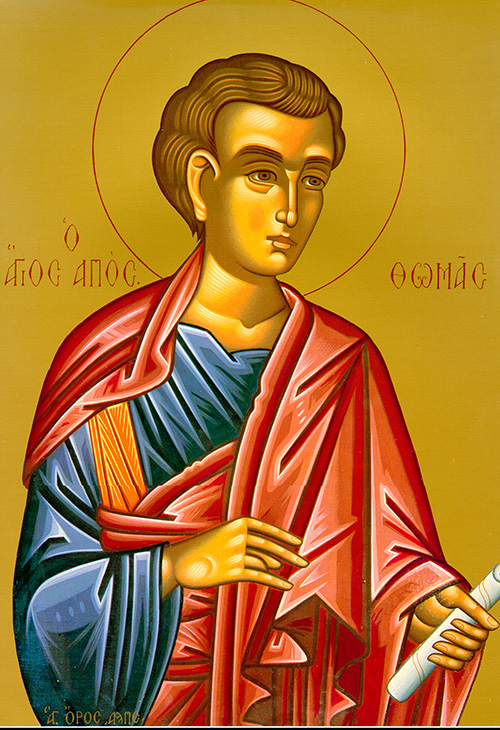 The holy and glorious apostle Thomas was a fisherman in Galilee, who, after hearing the words of the Lord, became his disciple. Thomas did not believe the other disciples when they announced the Resurrection of Christ. When Jesus himself showed his pierced side, Thomas exclaimed, “My Lord and my God.” According to Church Tradition, the holy Apostle Thomas founded Christian churches in Palestine, Mesopotamia, Parthia, Ethiopia and India. Preaching the Gospel earned him a martyr’s death. For having converted the wife and son of the prefect of the Indian city of Meliapur [Melipur], Thomas was locked up in prison, tortured, and finally, pierced with five spears, he departed to the Lord. Part of the relics of the holy Apostle Thomas are in India, in Hungary and on Mt. Athos.

You were both a disciple of Christ and a member of the divine apostolic college. Your lack of faith proved the Resurrection of Christ and your touch unleashed reverence, O all-praiseworthy Thomas, now obtain peace and mercy for us.

O Thomas, full of wisdom and grace, you were a disciple and faithful servant of Christ. You cried out in the sincerity of your repentance: You are my Lord and my God!

On the evening of that first day of the week, even though the disciples had locked the doors of the place where they were for fear of the Jews, Jesus came and stood before them. “Peace be with you,” he said. When he had said this, he showed them his hands and his side. At the sight of the Lord the disciples rejoiced. “Peace be with you,” he said again.

“As the Father has sent me, so I send you.” Then he breathed on them and said: “Receive the Holy Spirit. If you forgive men’s sins, they are forgiven them; if you hold them bound, they are held bound.”

It happened that one of the Twelve, Thomas (the name means, “Twin”), was absent when Jesus came. The other disciples kept telling him: “We have seen the Lord!” His answer was, “I will never believe it without probing the nailprints in his hands, without putting my finger in the nailmarks and my hand into his side.”

A week later, the disciples were once more in the room, and this time Thomas was with them. Despite the locked doors, Jesus came and stood before them. “Peace be with you,” he said to them; then, to Thomas: “Take your finger and examine my hands. Put your hand into my side. Do not persist in your unbelief, but believe!” Thomas said in response, “My Lord and my God!” Jesus then said to him: “You became a believer because you saw me. Blest are they who have not seen and have believed.”

Jesus performed many other signs as well – signs not recorded here – in the presence of his disciples. But these have been recorded to help you believe that Jesus is the Messiah, the Son of God, so that through his faith you may have life in his name.

Brothers and sisters: Each one should love his wife as he loved himself, the wife for her part showing respect for her husband. Children, obey your parents in the Lord, for that is what is expected of you. “Honor your father and mother” is the first commandment to carry a promise with it–”that it may go well with you, and that you may have long life on the earth.” Fathers, do not anger your children. Bring them up with the training and instruction befitting the Lord.

Slaves, obey your human masters with reverence, the awe, and sincerity you owe to Christ. Do not render service for appearance only and to please men, but do God’s will with your whole heart as slaves of Christ. Give your service willingly, doing it for the Lord rather than men. You know that each one, whether slave or free, will be repaid by the Lord for whatever good he does.

Masters, act in a similar way toward your slaves. Stop threatening them. Remember that you and they have a Master in heaven who plays no favorites.

At that time the report of Jesus being a great prophet spread throughout Judea and the surrounding country. The disciples of John brought their teacher word of all these happenings. Summoning two of them, John sent them to ask the Lord, “Are you ‘He who is to come’ or are we to expect someone else?” When the men came to Jesus they said, “John the Baptizer sends us to you with this question: ‘Are you “He who us to come” or do we look for someone else?’” (At that time he was curing many of their diseases, afflictions, and evil spirits; he also restored sight to many who were blind.) Jesus gave this response: “Go and report to John what you have seen and heard. The blind recover their sight, cripples walk, lepers are cured, the deaf hear, dead men are raised to life, and the poor have the good news preached to them. Blest is the man who finds no stumbling block in me.”

When the messengers of John had set off, Jesus began to speak about John to the crowds. “What did you go out to see in the desert–a reed swayed by the wind? What, really, did you go out to see–someone dressed luxuriously? Remember, those who dress in luxury and eat in splendor are to be found in royal palaces. Then what did you go out to see–a prophet? He is that, I assure you, and something more. This is the man of whom Scripture says, ‘I send my messenger ahead of you to prepare your way before you.’ I assure you, there is no man born of woman greater than John. Yet the least born into the kingdom of God is greater than he.”

The entire populace that had heard Jesus, even the tax collectors, gave praise to God, for they had received from John the baptismal bath he administered. The Pharisees and the lawyers, on the other hand, by failing to receive his baptism defeated God’s plan in their regard.