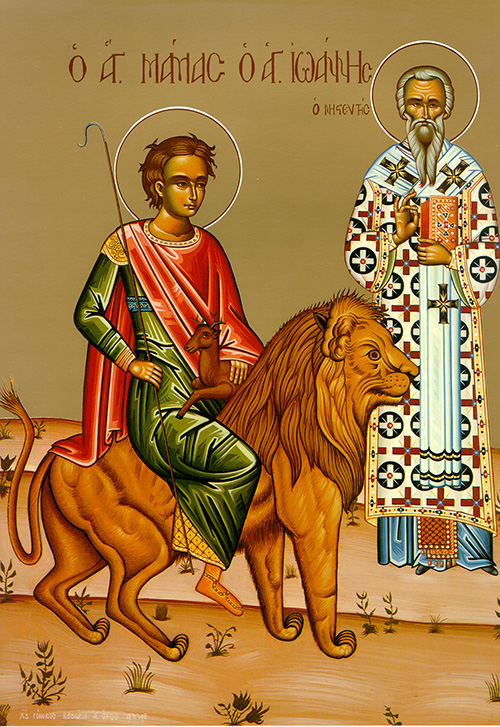 The holy martyr Mammas was born in Paphlagonia to Christian parents who were imprisoned for the name of Christ. He was dumb until the age of five, and his first word was ‘mama,’ and it is from this word that his name derives. At the age of fifteen, he was brought before the emperor Aurelian. The emperor commanded him to blaspheme Christ, and Mammas replied, “I shall not deny my God and King Jesus Christ, either in my heart or with my lips.” Mammas was martyred by a pagan priest in 274.

Our venerable father John the Faster was Patriarch of Constantinople from 582-595, and was the first to use the title “Ecumenical Patriarch.” He was a great faster, intercessor and wonderworker right up to the time of his death. Distinguished for his abstinence and prayer, St. John had such a love for the poor that he refused them nothing from his estate. After his death, his only personal possessions were found to be a wooden spoon, a linen shirt, and an old garnet. His writings on repentance and Confession are well known. After a virtuous life of piety, during which he performed many miracles, St. John reposed in the year 595.

Your martyr Mammas, O Lord our God, in his struggle received an incorruptible crown from You. With Your strength, he brought down the tyrants and broke the cowardly valor of demons. Through his prayers, O Christ our God, save our souls.

Your life has shown you to your flock as a rule of faith, an image of gentleness, and a teacher of moderation. You acquired greatness through humility and wealth through poverty. O father and bishop John, intercede with Christ our God to save our souls.

O holy Mammas, with the staff God gave to you, lead your people as a flock of life-giving pastures; crush the fierce and invisible enemies beneath the feet of those who honor you; for all those in danger have received you as their fervent intercessor.

You proved yourself a heavenly vessel of abstinence, O blessed John, and a lasting treasure of piety. Your life was radiant with perfect self-control, and you enriched the poor with alms, O venerable father, pray to Christ our God to give great mercy to us.

Brethren: I consider myself inferior to the “super-apostles” in nothing. I may be unskilled in speech but I know that I am not lacking in knowledge. We have made this evident to you in every conceivable way.

Could I have done wrong when I preached the gospel of God to you free of charge, humbling myself with a view to exalting you? I robbed other churches, I accepted support from them in order to minister to you. When I was with you and in want I lwas a burden to none of you, for the brothers who came from Macedonia supplied my needs. In every way possible I kept myself from being burdensome to you, and I shall continue to do so. I swear by the Christ who is in me that this boast of mine will not cease in the regions of Achaia! Why? Because I do not love you? God knows I do. What I am doing shall continue to do, depriving at every turn those who look for a chance to say that in their much-vaunted ministry they work on the same terms as we do. Such men are false apostles. They practice deceit in their disguise as apostles of Christ. And little wonder! For even Satan disguises himself as an angel of light. It comes as no surprise that his ministers disguise themselves as ministers of the justice of God. But their end will correspond to their deeds.

I repeat: let no one think me foolish. But if you do, then accept me as a fool all the way and let me do a little boasting. What I am about to say in this self-assured boasting, I speak not as the Lord desires but after the manner of a fool. Since many are bragging about their human distinctions, I too will boast. Being wise yourselves, you gladly put up with fools. You even put up with those who exploit you, who impose upon you and put on airs, with those who slap your face. To my shame I must confess that we have been too weak to do such things.

At that time Jesus began to teach beside the lake. Such a huge crowd gathered around him that he went and sat in a boat on the water, while the crowd remained on the shore nearby. He began to instruct them at great length by the use of parables, and in the course of his teaching said: “Listen carefully to this. A farmer went out sowing. Some of what he showed landed on the footpath, where the birds came along and ate it. Some of the seed landed on rocky ground where it had little soil; it sprouted immediately because the soil had no depth. Then , when the sun rose and scorched it, it began to wither for lack of roots. Again, some landed among thorns, which grew up and choked it off, and there was no yield of grain. Some seed, finally, landed on good soil and yielded grain that sprang up to produce at a rate of thirty – and sixty – and a hundredfold.” Having spoken this parable, he added: “Let him who has ears to hear me, hear!”