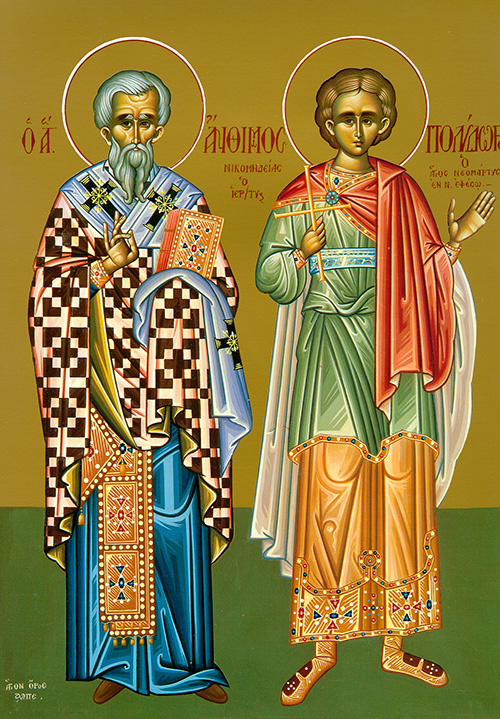 The holy martyr Anthimus, bishop of Nicomedia in Bithynia, and his companions, martyrs in the persecution of Diocletian the emperor in the year 303. In fact, a whole crowd followed St. Anthimus as he received the glory of martyrdom by beheading for the sake of his confession of Christ. Some of his companions were martyred by beheading, some burned up by fire, and finally, some were put in boats and drowned at sea.

Our venerable father Theoctistus of Palestine was the companion of our venerable father Euthymius the Great. They were persons of similar virtue and holiness, and they encouraged one another in their struggles. They went out to the desert for the Great Fast and discovered a cave where they planned to live in seclusion for the rest of their lives. The Lord had other plans, and they were discovered by a shepherd who spread the word of the ascetics living in a cave. Many monks from other monasteries came to visit them, and some stayed to be instructed by them. So many monks gathered that they built a lavra, and St. Theoctistus became the igumen there. The wise Theoctistus accepted all who came to him, confessing them and treating the infirmities of their wounded souls with appropriate spiritual remedies. When he had reached an advanced old age, St. Theoctistus became very ill. St. Euthymius (who was 90 years old himself) visited him and took care of him. St Theoctistus went to the Lord in 467.

You shared in the apostles’ way of life and succeeded to their throne, divinely inspired bishop. You found access to contemplation in the active life. Therefore, you rightly taught the word of truth and struggled for the faith to the shedding of your blood. O Priest-Martyr Anthimus, pray to Christ our God to save our souls.

Your abundant tears made the wilderness bloom, and your sufferings made your labors fruitful a hundredfold; you became a shining torch over the world. O Theoctistus, our father, pray to Christ our God that He may save our souls.

You stood out among bishops and traveled the road to martyrdom. You became an opponent of pagan idol worship and the protector of your flock. O God-wise one. Therefore, we now honor you, crying out in spirit: Deliver us from dangers through your intercession. O ever-memorable Anthimus.

You joined the great Euthymius in the desert, and you became an angel on earth with your good works. O Father, you cleanse the hearts of the faithful by the power of wonderful signs. We venerate you with love for this, O Theoctistus.

Brothers and sisters: There is, to be sure, a certain wisdom which we express among the spiritually mature. It is not a wisdom of this age, however, nor of the rulers of this age, who are men headed for destruction. No, what we utter is God’s wisdom: a mysterious, a hidden wisdom. God planned it before all ages for our glory. None of the rulers of this age knew the mystery; if they had known it, they would never have crucified the Lord of glory. Of this wisdom it is written: “Eye has not seen, ear has not heard, nor has it so much as dawned on man what God has prepared for those who love him.”

At that time the Pharisees went off and began to plot how they might trap Jesus in speech. They sent their disciples to him, accompanied by Herodian sympathizers, who said: “Teacher, we know you are a truthful man and teach God’s way sincerely. You court no one’s favor and so not act out of human respect. Give us your opinion, then, in this case. Is it lawful to pay tax to the emperor or not?” Jesus recognized their bad faith and said to them, “Why are you trying to trip me up, you hypocrites? Show me the coin used for the tax.” When they handed him a small Roman coin he asked them, “Whose head is this, and whose inscription?” “Caesar’s,” they replied. At that he said to them, “Then give to Caesar what is Caesar’s, but give to God what is God’s.” Taken aback by this reply, they went off and left him.