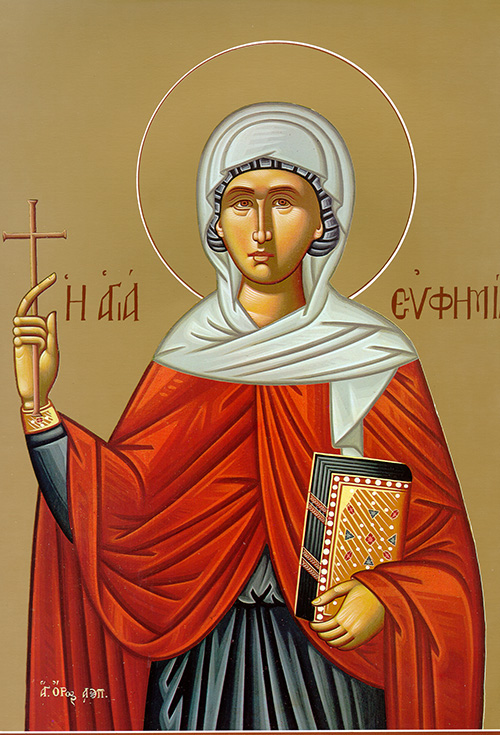 The holy great-martyr Euphemia was raised by her devout Christian parents. Her father, Philophronus, was a senator. Under the emperor Diocletian, when the Proconsul Priscus held a feast and offered sacrifice to Ares in Chalcedon, forty-nine Christians avoided this sacrificial offering and hid themselves. However, they were discovered and brought before Priscus. Among them was St. Euphemia. For nineteen consecutive days, Priscus imposed various tortures on them. On the twentieth day he separated Euphemia from the others and began to flatter her for her beauty. As his flattery was in vain, he ordered that the virgin be tortured again. First, they tortured her on the wheel, but an angel of God appeared to Euphemia and shattered the wheel. Then they threw her into a fiery furnace, but she was preserved by the power of God. Upon seeing this, two soldiers, Victor and Sosthenes, came to believe in Christ. Euphemia was then thrown into a pit filled with water and every kind of poisonous vermin; but she made the sign of the Cross over the water and remained unharmed. She was finally thrown to the wild beasts and, with a prayer of thanksgiving to God, gave up her spirit in the year 303. She is also commemorated on July 11.

Your lamb Euphemia, O Jesus, cries out in a loud voice: I love You, my Bridegroom; I seek You with painful longing; I am crucified with You; in your baptism, I am buried with You; I suffer for You that I may reign with You; and I die for You that I may live with You. Receive me as a spotless sacrifice immolated with love for You. By her prayers, O merciful One, save our souls.

You waged a good battle in your embrace of death, and after death you sanctified us with miraculous signs. We sing of your holy dormition, O all-praiseworthy Euphemia, coming to your divine church with faith, seeking to be saved from spiritual ills and to obtain the grace of your miracles.

Brothers and sisters: In the past, when you didn’t not acknowledge God, you served as slaves to gods who are not really divine. Now that you have come to know God–or rather, have been known by him–how can you return to those powerless, worthless, natural elements to which you seem willing to enslave yourselves once more? You even go so far as to keep the ceremonial observance of days and months, seasons and years! I fear for you; all my efforts with you may have been wasted.

I beg you, brethren, to become like me as I became like you. (Understand, you have not done me any wrong.) You are aware that it was a bodily ailment that first occasioned my bringing you the gospel. My physical condition was a challenge which you did not despise or brush aside in disgust. On the contrary, you took me to yourselves as an angel of God, even as if I had been Christ Jesus! What has happened to your openhearted spirit? I can testify on your behalf that if it were possible you would have plucked out your eyes and given them to me. Have I become your enemy just because I tell you the truth?

The people I have referred to are not courting your favor in any generous spirit. What they really want is to exclude you so that you may court their favor. It would be well for you to be courted for the right reasons at all times, and not only when I happen to be with you. You are my children, and you put me back in labor pains until Christ is formed in you. If only I could be with you now and speak to you differently! You have me at a complete loss. You who want to be subject to the law, tell me: do you know what the law has to say?

At that time Jesus insisted that his disciples get into a boat and precede him to the other side toward Bethsaida, while he dismissed the crowd. When he had taken leave of them, he went off to the mountain to pray. As evening drew on, the boat was far out on the lake while he was alone on the land. Then, seeing them tossed about as they tried to row with the wind against them, he came walking toward them on the water; the time was between three and six in the morning. He meant to pass them by. When they saw him walking on the lake, they thought it was a ghost and they began to cry out. They had all seen him and were terrified. He hastened to reassure them: “Got hold of yourselves! It is I. Do not be afraid!” He got into the boat with them and the wind died down. They were taken aback by these happenings, for they had not understood about the loaves. On the contrary, their minds were completely closed to the meaning of the events. After making the crossing they came ashore at Gennesaret, and tied up there.