Sept. 20 The Holy Martyr Eustace and his Family; The Holy Martyrs and Confessors the Great Prince Michael and his Counselor Theodore, the Wonder-workers of Chernigov 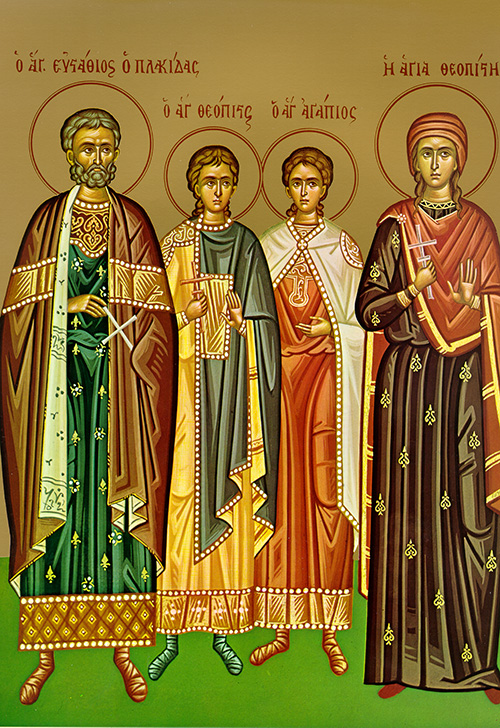 The holy martyr Eustace was a Roman military leader in the time of the emperors Titus and Trajan. He was a righteous and merciful pagan. One day while hunting, he found a stag. In the stag’s antlers, a cross appeared, and Eustace heard a voice telling him to find a Christian priest and be baptized. He and his whole family were baptized, and then left Rome for Egypt on their way to Jerusalem. On the journey, they were all separated. Years later, they found each other again only to be martyred after confessing for Christ in front of the emperor Hadrian.

The holy martyr Prince Michael of Chernigov was a sickly child who was known for his great piety. In his youth he was healed by the intercession of St. Nikeras the Stylite of Pereyaslavl. When the Mongol horde invaded and conquered the area in 1240, Prince Michael and his counselor Theodore went to meet the Mongol khan. A pagan priest demanded the two worship fire before their meeting, but the saints refused. They had come prepared to confess for Christ. Prince Michael was beaten and beheaded. The Mongols promised Theodore great honor if he participated in a pagan ritual, but he steadfastly refused, and followed the path of his prince. He too was beheaded. The confessors’ unwavering faith impressed the khans so much so that they no longer required the conquered Russians to perform any pagan rituals.

Your martyrs, O Lord our God, in their struggles received incorruptible crowns from You. Armed with Your strength, they brought down the tyrants and broke the cowardly valor of demons. Through their prayers, O Christ our God, save our souls.

Having completed your life as martyrs, having been adorned with the crowns of confessors flowing up to the heavens, O wise Michael, pray to Christ our God to protect your country according to his great mercy.

O holy Eustace, you were an imitator of Christ in His passion. You drank of His cup with courage and thereby became a sharer of His glory, receiving divine forgiveness from on high from the God of all.

Perceiving an earthly kingdom as nothing and having abandoned passing glory, you came to the labor of voluntary ascetic effort. You preached the Trinity to the impure torturers, O passion-bearer Michael and brave Theodore. Standing before the King of Powers, pray to protect your country without harm, and for us who venerate you unceasingly.

Brothers and sisters, as for me, if I am still preaching circumcision, why do the attacks on me continue? If I were, the cross would be a stumbling block no more. Would that those who are troubling you might go the whole way, and castrate themselves!

My brethren, remember that you have been called to live in freedom–but not a freedom that gives free reign to the flesh. Out of love, fulfillment in this one saying: “You shall love your neighbor as yourself.” If you go on biting and tearing one another ro pieces, take care! You will end up in mutual destruction!

My point is that you should live in accord with the spirit and you will not yield to the cravings of the flesh. The flesh lusts against the spirit and the spirit against the flesh; the two are directly opposed. This is why you do not do what your will intends. If you are guided by the spirit, you are not under the law. It is obvious what proceeds from the flesh: lewd conduct, impurity, licentiousness, idolatry, sorcery, hostilities, bickering, jealousy, drunkenness, orgies, and the like. I warn you, as I have warned you before: those who do such things will not inherit the kingdom of God!

Jesus, full of the Holy Spirit, then returned from the Jordan and was conducted by the Spirit into the desert.