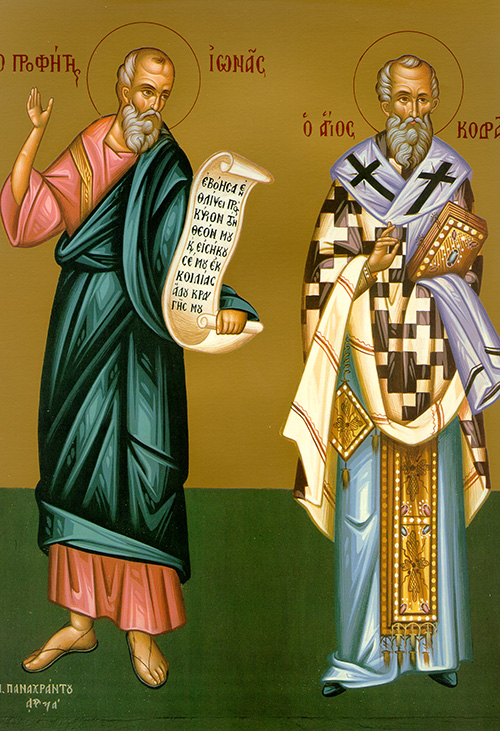 The holy apostle Quadratus of Magnesia of Greece, was a disciple of the Apostles. It is told that he, by his faith and diligence, gathered together the Church, which had been scattered by terror in the persecution of Hadrian the emperor. He also presented a book in defense of the Christian religion, worthy of the apostolic teaching, to that same emperor.

O holy Apostle Quadratus, intercede with the merciful God that He may grant our souls forgiveness of sin.

O Lord, the world offers You the apostle Quadratus, a precious hierarch and a courageous sufferer. The world honors his honorable memory with hymns, asking always remission for its sins through his intercession, O merciful Lord.

Brothers and sisters: Help carry one another’s burdens; in that way you will fulfill the law of Christ. If anyone thinks he amounts to something, when in fact he is nothing, he is only deceiving himself. Each man should look to his conduct; if he has reason to boast of anything, it will be because the achievement is his and not another’s. Everyone should bear his own responsibility.

The man instructed in the word should share all he has with his instructor. Make no mistake about it, no one makes a fool of God! A man will reap only what he sows. If he sows in the field of the flesh, he will reap a harvest of corruption; but if he seed-ground is the spirit, he will reap everlasting life. Let us not grow weary of doing good; if we do not relax our efforts, in due time we shall reap our harvest. While we have the opportunity, let us do good to all men-but especially those of the household of the faith.

At that time Jesus, full of the Holy Spirit, returned from the Jordan and was conducted by the Spirit into the desert for forty days, where he was tempted by the devil. During that time he ate nothing, and at the end of it he was hungry. The devil said to him, “ If you are the Son of God, command this stone to turn into bread.” Jesus answered him, “Scripture has it, ‘Not on bread alone shall man live.’”

Then the devil took Jesus up higher and showed him all the kingdoms of the world in a single instant. The devil said to Jesus, “I will give you all this power and glory of these kingdoms; the power has been given to me and I give it to whomever I wish. Prostrate yourself in homage before me, and it shall all be yours.” In reply, Jesus said to him, “Scripture has it, ‘You shall do homage to the Lord your God; him alone shall you adore.’”

Then the devil led Jesus to Jerusalem, set him on a parapet of the temple, and said to him, “If you are the Son of God, throw yourself down from here, for Scripture has it, ‘He will bid his angels watch over you’; and again [it says] ‘With their hands they will support you, that you may never stumble on a stone.’”

Jesus said to him in reply, “It also says, ‘You shall not put the Lord your God to the test.’”

When the devil had finished all the tempting he left him, to await another opportunity. Jesus returned in the power of the Spirit to Galilee, and his reputation spread throughout the region. He was teaching in their synagogues, and all were loud in his praise.