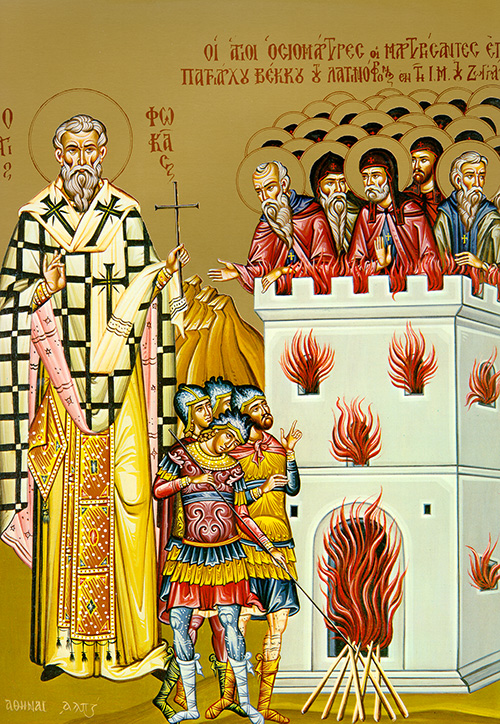 The holy martyr Phocas, bishop of Sinope, strengthened the faithful by his example and words as bishop, and brought many to the true faith. The governor of the province had him seized and tortured, and then killed him by throwing him into boiling water. He died during the reign of the emperor Trajan in 103.

The holy prophet Jonah, son of Amathi, by whose name a book of the Old Testament is called. Jonah’s famous passage from the belly of the whale is told as a sign of the resurrection of the Lord in the Gospel.

Our venerable father Jonah the priest was the father of Theophane the Hymnographer and Theodore the Artist. He was a wonder-worker who died in the monastery of St. San as the Sanctified in the 9th century.

You shared in the apostles’ way of life and succeeded to their throne, divinely inspired Bishop. You found access to contemplation in the active life. Therefore, you rightly taught the word of truth and struggled for the faith to the shedding of your blood. O Priest-Martyr Phocas, pray to Christ our God to save our souls.

As we celebrate the memory of your prophet Jonah, O Lord, we implore you to save our souls through his prayers

As a bishop you offered the sacrifice, O father, and at the end of your life you offered yourself. You gave witness to Christ God before the law, strengthened by angels and ready for death. Be ever with those who sing to you: Be with us, Phocas, and never against us.

You accepted God‘s decree and became a marvelous prophet. You remained in the whale for three days as an image of the third day Resurrection. You left the whale unharmed. You were a confessor of the faith in the great city of Nineveh. For all of this we pray to you, Jonah, as a type of Christ God who loves mankind.

Paul, by the will of God an apostle of Jesus Christ, to the holy ones [at Ephesus], believers in Christ Jesus. Grace and peace to you from God our Father and the Lord Jesus Christ.

Praised be the God and Father of our Lord Jesus Christ, who has bestowed on us in Christ every spiritual blessing in the heavens! God chose us in him before the world began, to be holy and blameless in his sight, to be full of love; he likewise predestined us through Christ Jesus to be his adopted sons — such was his will and pleasure — that all might praise the glorious favor he has bestowed on us in his beloved.

It is in Christ and through his blood that we have been redeemed and our sins forgiven, so immeasurably generous is God’s favor to us. God has given us the wisdom to understand fully the mystery, the plan he was pleased to decree in. Christ.

At that time Jesus came to Nazareth where he had been reared, and entering the synagogue on the sabbath as he was in habit of doing, he stood up to do the reading. When the book of the prophet Isaiah was handed to him, he unenrolled the scroll and found the passage where it is written: “The spirit of the Lord is upon me; therefore he has anointed me. He has sent me to bring glad tidings to the poor, to proclaim liberty to captives, recovery of sight to the blind and released to prisoners, to announce a year of favor from the Lord.”

Rolling up the scroll he gave it back to the assistant and sat down. All in the synagogue had their eyes fixed on Jesus. Then he began by saying to them, “Today this scripture passage is fulfilled in your hearing.” All who were present spoke favorably of him; they marveled at the appealing discourse which came from his lips.