Sept. 23 The Conception of the Prophet and Forerunner, John the Baptist 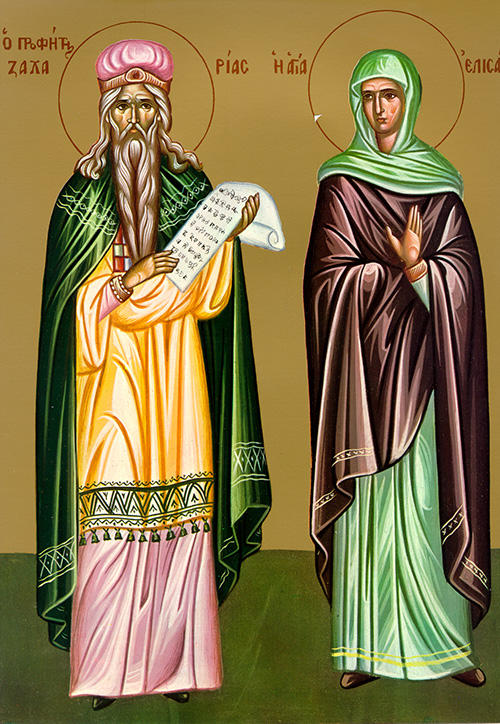 On this day are celebrated God’s mercy, His wondrous deeds, and His wisdom. The holy Prophet Malachi prophesied that before the Messiah’s birth His Forerunner would appear, and would indicate His coming. The Jews therefore in awaiting the Messiah also awaited the appearance of His Forerunner. The story of the conception of St. John is related in the first chapter of the Gospel according to St. Luke.

Joy to you, O barren one, unable to give birth; behold, you conceive today the one who is really a lamp of the Sun, who will enlighten the whole world that suffers from blindness. Rejoice, O Zechariah, and cry out with confidence: The prophet of the Most High is about to be born!

Zechariah is radiant in joy with his wife Elizabeth, for she has conceived John the Forerunner whom the angel announced rejoicing. And humanity honors him properly as the mystical passage of grace.

In the days of Herod, king of Judea, there was a priest named Zechariah of the priestly order of Abijah; his wife, Elizabeth, was a descendant of Aaron. Both were just in the eyes of God, blamelessly following all the commandments and ordinances of the Lord. They were childless, for Elizabeth was sterile; moreover, both were advanced in years.

Once, when it was the turn of Zechariah’s class and he was fulfilling his functions as a priest before God, it fell to him by lot according to priestly usage to enter the sanctuary of the Lord and offer incense. While the full assembly of people was praying outside at the incense hour, an angel of the Lord appeared to Him, standing at the right of the altar of incense. Zechariah was deeply disturbed upon seeing him, and overcome with fear.

The angel said to him: “Do not be frightened, Zechariah; your prayer has been heard. Your wife Elizabeth shall bear a son who you shall name John. Joy and gladness will be yours, many will rejoice at his birth; for he will be great in the eyes of the Lord. He will never drink wine or strong drink, and he will be filled with the Holy Spirit from his mother’s womb. Many of the sons of Israel will he bring back to the Lord their God. God himself will go before him, in the spirit and power of Elijah, to turn the hearts of fathers and their children and the rebellious to the wisdom of the just, and to prepare for the Lord a people well-disposed.”

Zechariah said to the angel: “How am I to know this? I am an old man; my wife is too advanced in age.” The angel replied: “I am Gabriel, who stand in attendance before God. I was sent to speak to you and bring this good news. But now you will be mute–unable to speak–until the day these things take place, because you have not trusted my words. They will all come true in due season.” Meanwhile, the people were waiting for Zechariah, wondering at his delay in the temple. When he finally came out he was unable to speak to them, and they realized that he had seen a vision inside. He kept making signs to them, for he remained speechless.

Then, when his time of priestly service was over, he went home. Afterward, his wife Elizabeth conceived. She went into seclusion for five months, saying, “In these days the Lord is acting on my behalf; he has seen fit to remove my reproach among men.”

Brothers and sisters: It is in Christ and through his blood that we have been redeemed and our sins forgiven, so immeasurably generous is God’s favor to us. God has given us the wisdom to understand fully the mystery, the plan he was pleased to decree on Christ, to be carried out in the fullness of time: namely, to bring all things in the heavens and on earth into one under Christ’s headship.

In him we were chosen; for in the decree of God, who administers everything according to his will and counsel, we were predestined to praise his glory by being the first to hope in Christ. In him you too were chosen; when you heard the glad tidings of salvation, the word of truth, and believed in it, you were sealed with the Holy Spirit who had been promised. He is the pledge of our inheritance, the first payment against the full redemption of a people God has made his own, to praise his glory.

For my part, from the time I first heard of your faith in the Lord Jesus and your love for all the members of the church, I have never stopped thanking God for you and recommending you in my prayers. May the God of our Lord Jesus Christ, the Father of glory, grant you a spirit of wisdom and insight to know him clearly.

At that time, all who were present in the synagogue spoke favorably of Jesu; they marveled at the appealing discourse which came from his lips. They also asked, “Is this not Joseph’s son?”

Jesus said to them, “You will doubtless quote me the proverb, ‘Physician, heal yourself,’ and say, ‘Do here in your own country the things we have heard you have done in Capernaum.’ But in fact,” he went on, “no prophet gains acceptance in his native place. Indeed, let me remind you, there were many widows in Israel in the days of Elijah when the heavens remained closed for three and a half years and a great famine spread over the land. It was to none of these that Elijah was sent, but to a widow of Zarephath near Sidon. Recall, too, the many lepers in Israel in the time of Elisha the prophet; yet not one was cured except Naaman the Syrian.”

At these words the whole audience in the synagogue was filled with indignation. They rose up and expelled him from the town, leading him to the brow of the hill on which it was built and intending to hurl him over the edge. But he went straight through their midst and walked away.