Sept. 24 The Holy Martyr, First Among Women, and Equal to the Apostles, Thecla 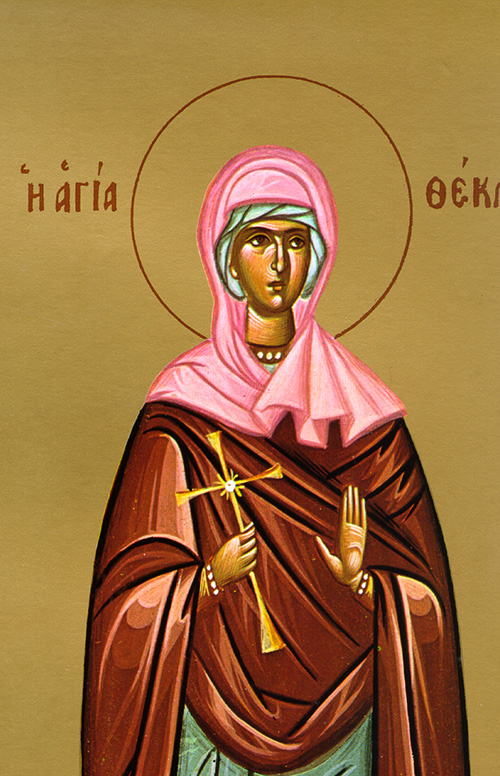 The holy martyr Thecla, first among women and equal to the Apostles, was converted to the faith by the preaching of the Apostle Paul when he came to Iconium with Barnabas. Thecla became a follower of Paul, and went with him to Antioch. She settled in a solitary place near Seleucia, and was martyred in the year 51 by the local physicians who were jealous over her gifts of healing.

O bride of God, Thecla, you were instructed by the words of Paul, you were made firm in the faith by Peter. You were revealed a protomartyr called by God among women and the first woman to suffer. You walked into the flames as into a flowering garden; the beasts and the brutes were frightened of you, for you were armed with the cross. O all-praiseworthy Thecla, pray to Christ God to save our souls.

You were radiant with the goodness of virginity and you were adorned with the crown of martyrdom. You were entrusted with the work of the apostles, O Virgin Thecla, for you are most glorious since you transformed the flames of the fire into dew. Through your prayers, you tamed the anger of the youth, for you were the first woman to suffer martyrdom.

Brothers and sisters: “All things are lawful,” but not all are advantageous. “All things are lawful” –which does not mean that everything is constructive. No man should seek his own interest but rather that of his neighbor. Eat whatever is sold in the market without raising any question of conscience. [Scripture says,] “The earth and its fullness are the Lord’s.” If an unbeliever invites you to his table and you want to go, eat whatever is placed before you, without raising any question of conscience. But if someone should say to you, “This was offered in idol worship,” do not eat it, both for the sake of the one who called attention to it and on account of the conscience issue–not your own conscience but your neighbor’s.

At that time Jesus went down to Capernaum, a town of Galilee, where he began instructing them on the sabbath day. They were spellbound by his teaching, for his words had authority.

In the synagogue there was a man with an unclean spirit, who shrieked in a loud voice: “Leave us alone! What do you want of us, Jesus of Nazareth? Have you come to destroy us? I know who you are: the Holy One of God.” Jesus said to him sharply, “Be quiet! Come out of him.” At that, the demon threw the man to the ground before everyone’s eyes and came out of him without doing him any harm. All were struck with astonishment, and they began saying to one another: “What is there about his speech? He commands the unclean spirits with authority and power, and they leave.” His renown kept spreading through the surrounding country.