Sept. 26 The Passing of the Holy Apostle and Evangelist John the Theologian 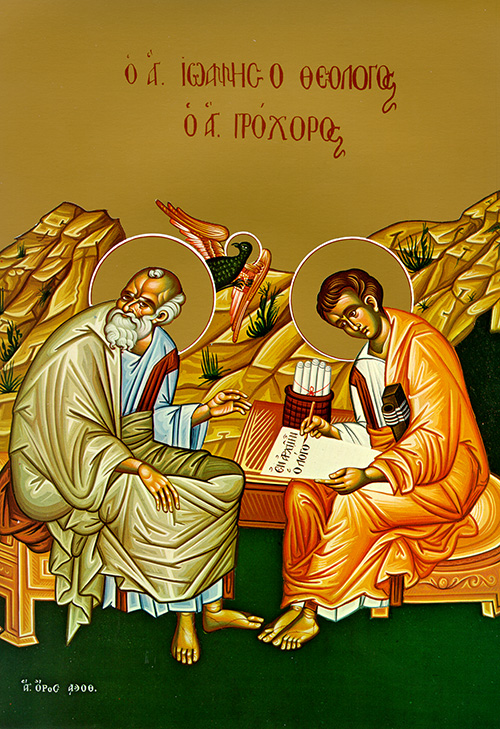 The holy apostle and evangelist John the Theologian reposed when he was more than a hundred years old. He far outlived the other eyewitnesses of the Lord, and for a long time he remained the only remaining eyewitness of the earthly life of the Savior. When it was time for his departure from this life, the Apostle John went out beyond the city limits of Ephesus with the families of his disciples. He bade them prepare for him a cross-shaped grave, in which he lay, telling his disciples that they should cover him over with the soil. The disciples tearfully kissed their beloved teacher, but not wanting to be disobedient, they fulfilled his bidding. They covered the face of the saint with a cloth and filled in the grave. Learning of this, other disciples of St. John came to the place of his burial. When they opened the grave, they found it empty. Each year from the grave of the holy Apostle John on May 8 came forth a fine dust, which believers gathered up and were healed of sicknesses by it. Therefore, the Church also celebrates the memory of the holy Apostle John the Theologian on May 8.

Beloved Apostle of Christ our God, hasten to deliver a people that lacks any other defense. He who accepted that you lay your head on His breast will also accept your prayer. Pray to Christ, O Theologian, that He may overcome the darkness of pagan nations, and beg that He grant us peace and abundant mercy.

O man of purity, who could describe your glory? Many are the miracles and healings you perform. Since you are a theologian and the beloved of Christ, intercede with Him for the salvation of our souls.

Dearly beloved: No one has ever seen God. Yet if we love one another God dwells in us, and his love is brought to perfection in us. The way we know we remain in him and he in us is that he has given us his Spirit. We have seen for ourselves, and can testify, that the Father has sent the Son as savior of the world. When anyone acknowledges that Jesus is the Son of God, God dwells in him and he in God. We have come to know and to believe in the love God has for us. God is love, and he who abides in love abides in God, and God in him. Our love is brought to perfection in this, that we should have confidence on the day of judgment; for our relation to this world is just like his. Love has no room for fear; rather, perfect love casts out all fear. And since fear has to do with punishment, love is not yet perfect in one who is afraid. We, for our part, love because he first loved us.

At that time near the cross of Jesus there stood his mother, his mother’s sister, Mary the wife of Clopas, and Mary Magdalene. Seeing his mother there with the disciples whom he loved, Jesus said to his mother, “Woman, there is your son.” In turn he said to the disciple, “There is your mother.” From that hour onward, the disciple took her into his care.

It is the same disciple who is witness to these things; it is he who wrote them down and his testimony, we know, is true. There are still many other things that Jesus did, yet if they were written about in detail, I doubt there would be room enough in the entire world to hold the books to record them.

Brothers and sisters: [God, the Father of glory,] has put all things under Christ’s feet and has made him, thus exalted, head of the church, which is his body: the fullness of him who fills the universe in all its parts.

You were dead because of your sins and offenses, as you gave allegiance to the present age and to the prince of the air, that spirit who is even now at work among the rebellious. All of us were once of their company; we lived at the level of the flesh, following every whim and fancy, and so by nature deserved God’s wrath like the rest.

At that time Jesus left the synagogue and entered the house of Simon. Simon’s mother-in-law was in the grip of a severe fever, and they interceded with Jesus for her. He stood over her and addressed himself to the fever, and it left her. She got up immediately and waited on them.

At sunset, all who had people sick with a variety of diseases took them to Jesus, and he laid his hands on each of them and cured them. Demons departed from many, crying out as they did so, “You are the Son of God!” He rebuked them and did not allow them to speak because they knew he was the Messiah.

The next morning he left the town and set out into the open country. The crowds went in search of him, and when they found him they tried to keep him from leaving them. But he said to them, “To other towns I must announce the good news of the reign of God, because that is why I was sent.” And he continued to preach in the synagogues of Judea.