Sept. 27 The Holy Martyr Callistratus and his Companions; Our Venerable Father Nilus, Founder and Hegumen of the Monastery of Grottaferrata 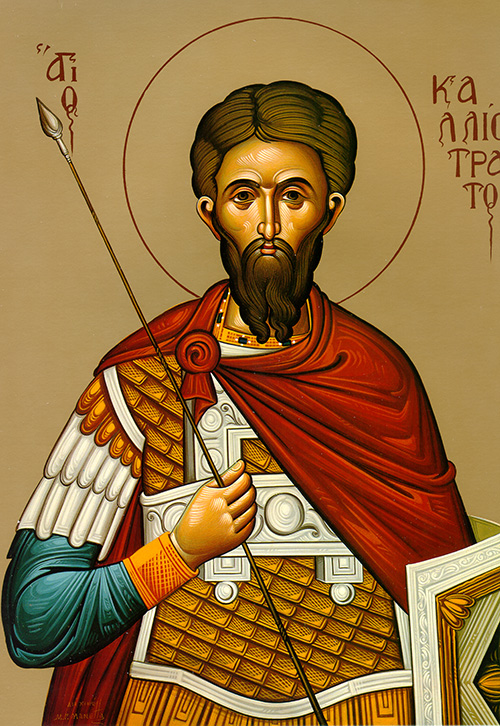 The holy martyr Callistratus was raised a Christian and became a soldier. Reported by one of his cohort as a believer, he was imprisoned and ordered to offer sacrifice to idols. He refused. He was repeatedly tortured and still remained faithful, so much so that forty-nine of his fellow soldiers came to believe in Christ. They were all killed by the sword in the year 304.

Our venerable father Nilus was the founder and hegumen of the Grottaferrata Monastery. He was of Greek origin and sought the holy life of conversation. He pursued abstinence, humility, and wandering. He was remarkable for his prophecy and his teaching of wisdom. He established the celebrated monastery of Grottaferrata according to the customs of the eastern Fathers. In his ninetieth year of life, he surrendered his spirit to God while praying in the year 1002.

You suffered deep wounds and received crowns from God. Pray to Christ for those who keep your dear memory alive, O great Callistratus, and you blessed martyrs who suffered with him. Pray also that Christ might give peace to His people and His flock, for He is the strength of the faithful.

Brothers and sisters: You are strangers and aliens no longer. No, you are fellow citizens of the saints and members of the household of God. You form a building which rises on the foundation of the apostles and prophets, with Christ Jesus himself as the capstone. Through him the whole structure is fitted together and takes shape as a holy temple in the Lord; in him you are being built into this temple, to become a dwelling place for God in the Spirit.

I am sure you have heard of the ministry which God in his goodness gave me in your regard. That is why to me, Paul, a prisoner for Christ Jesus on behalf of you Gentiles, God’s secret plan as I have briefly described it was revealed. When you read what I have said, you will realize that I know what I am talking about in speaking of the mystery of Christ, unknown to men in former ages but now revealed by the Spirit to the holy apostles and prophets. It is no less than this; in Christ Jesus the Gentiles are now co-heirs with the Jews, members of the same body and sharer of the promise through the preaching of the gospel.

Through the gift God in his goodness bestowed on me by the exercise of his power, I became a minister of the gospel.

At that time in a certain town, a man full of leprosy came to Jesus. Seeing Jesus, he bowed down to the ground and said to him, “Lord, if you will to do so, you can cure me.” Jesus stretched out his hand to touch him and said, “I do will it. Be cured.” Immediately the leprosy left him. Jesus instructed the man: “Tell no one, but go and show yourself to the priest. Offer for your healing what Moses prescribed; that should be a proof for them.” His reputation spread more and more, and great crowds gathered to hear him and to be cured of their maladies. He often retired to deserted places and prayed.