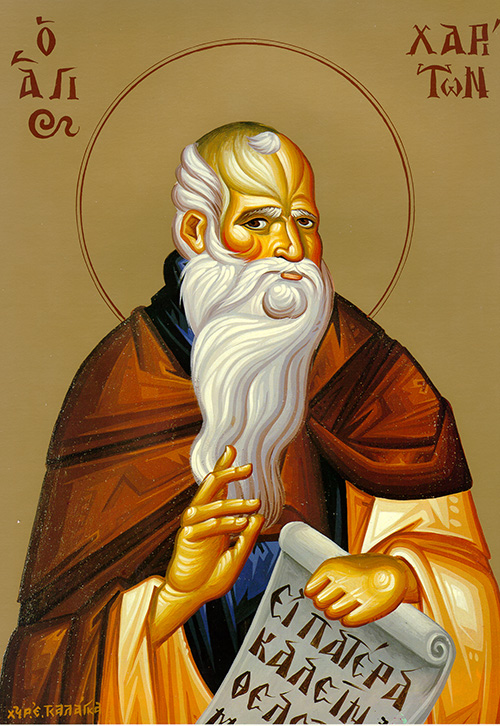 Our venerable father and confessor Chariton was abbot in the Old Lavra near Bethlehem in Palestine during the 4th century. He was diligent in prayer and fasting, and founded many lavras in the desert before his falling asleep in the Lord in 362.

The holy martyr Wenceslaus, prince of the Czechs, was the leader of the Bohemians. He was trained in divine and human wisdom by his grandmother St. Ludmilla. He was severe toward himself but gentle in ruling his kingdom and merciful to the poor. He redeemed in large numbers pagan slaves about to be sold that they might be baptized. After enduring many difficulties in ruling his subjects and in spreading the faith, he was betrayed by his brother Boleslaus and killed by assassins in a church in Old Boleslavia (modern-day Altbunzlau) in Bohemia in the year 929.

Your abundant tears made the wilderness bloom, and your deep sighing made your labor fruitful a hundredfold. You became a star shining over the world with miracles, holy father Chariton. Pray to Christ God that He may save our souls.

O divinely minded Chariton, you found your delight in the monastic life. You conquered the passions of your body and increased in faith; you blossomed forth like the Tree of Life in the midst of paradise, O most blessed and holy father.

At that time, coming down the mountain with the Twelve, Jesus stopped at a level to stretch where there were many of his disciples; a large crowd of people was with them from all Judea and Jerusalem and the coast of Tyre and Sidon, people who came to hear him and be healed of their diseases. Those who were troubled with unclean spirits were cured; indeed, the whole crowd was trying to touch him because power went out from him which cured all. Then, raising his eyes to his disciples, he said: “Blest are you poor; the reign of God is yours. Blest are you who hunger; you shall be filled. Blest are you who are weeping; you shall laugh. Blest shall you be when men hate you, when they ostracize you and insult you and proscribe your name as evil because of the Son of Man. On the day they do so, rejoice and exult, for your reward shall be great in heaven.”

Brothers and sisters: To me, the least of all believers, was given the grace to preach to the Gentiles the unfathomable riches of Christ and to enlighten all men on the mysterious design which for ages was hidden in God, the Creator of all. Now, therefore, through the church, God’s manifold wisdom is made known to the principalities and powers of heaven, in accord with his age-old purpose, carried out in Christ Jesus our Lord. In Christ and through faith in him we can speak freely to God, drawing near him with confidence. Hence, I beg you not to be disheartened by the trials I endure for you; they are your glory.

That is why I kneel before the Father from whom every family in heaven and on earth takes its name; and I pray that he will bestow in you gifts in keeping with the riches of his glory. May he strengthen you inwardly through the working of his Spirit. May Christ dwell in your hearts through faith, and may charity be the root and foundation of your life. Thus you will be able to grasp fully, with all the holy ones, the breadth and length and height and depth of Christ’s love, and experience this love which surpasses all knowledge, so that you may attain to the fullness of God himself.

To him whose power now at work in us can do immeasurably more than we ask or imagine–to him be glory in the church and in Christ Jesus through all generations, world without end. Amen.

At that time the Pharisees and scribes said to Jesus: “The disciples of John fast frequently and offer prayers; the disciples of the Pharisees do the same. Yours, on the contrary, eat and drink freely.” Jesus replied: “Can you make guests of the groom fast while the groom us still with them? But when the day comes that the groom is removed from their midst, they will surely fast in those days.”

Jesus then proposed to them this figure: “No one tears a piece from a new coat to patch an old one. If he does, he will only tear the new coat, and the piece taken from it will not match the old. Moreover, no one pours new wine into old wineskins. Should he do this, the new wine will burst the old skins, the wine will spill out, and the skins will be lost. New wine should be poured into fresh skins. No one, after drinking old wine, wants new. He says, ‘I find the old wine better.’”