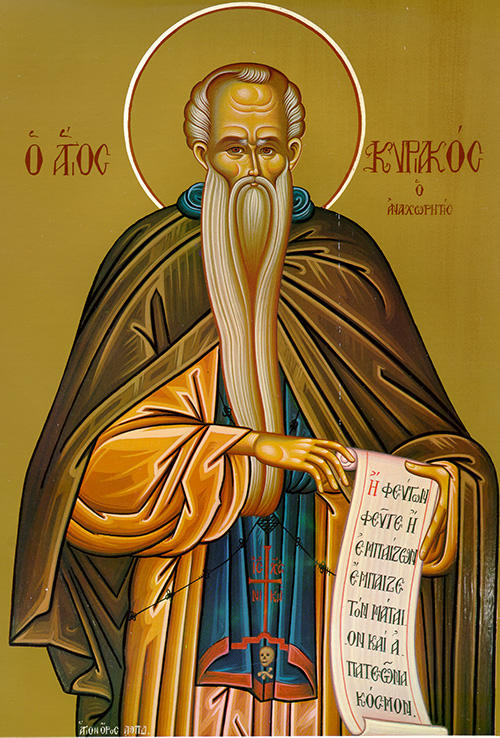 Our venerable father Cyriacus the anchorite was born in Corinth of a Christian family, he left to go to Jerusalem and entered the monastery. He learned at the feet of saints such as Euthymius and Gerasimos. He was famous for his silence, his asceticism, and his zeal for the Orthodox faith.

You made the wilderness your dwelling, O father Cyriacus, the bearer of God. You became an angel in the flesh and a wonderworker. Through prayers, fast, and vigils, you obtained from God special graces to heal the sick and to sanctify the souls of those who come to you with trust. Glory to the One who gave you strength! Glory to the One who crowned you! Glory to the One who through your intercession grants healing to all!

The holy lavra always honors you as a powerful protector and advocate, and yearly celebrates your memory. But since you have confidence before the Lord, keep us safe from our enemies, so that we may cry out: Rejoice, O thrice-blessed Father.

Brothers and sisters: Let us, then, be children no longer, tossed here and there, carried about by every wind of doctrine that originates in human trickery and skill in proposing error. Rather, let us profess the truth in love and grow to the full maturity of Christ the head. Through him the whole body grows, and with the proper functioning of the members joined firmly together by each supporting ligament, builds itself up to love. I declare and solemnly attest in the Lord that you must no longer live as the pagans do–their minds empty, their understanding darkened. They are estranged from a life in God because of their ignorance and their resistance; without remorse they have abandoned themselves to lust and the indulgence of every sort of lewd conduct.

At that time Jesus went out to the mountain to pray, spending the night in communion with God. At daybreak he called his disciples and selected twelve of them to be his apostles: Simon, to whom he gave the name Peter, and Andrew his brother, James and John, Philip and Bartholomew, Matthew and Thomas, James the son of Alphaeus, and Simon called the Zealot, Judas son of James, and Judas Iscariot, who turned traitor.

Coming down the mountain with them, Jesus stopped at a level stretch where there were many of his disciples; a large crowd of people was with them from all Judea and Jerusalem and the coast of Tyre and Sidon, people who came to hear him and be healed of their diseases. Those who were troubled with unclean spirits were cured; indeed, the whole crowd was trying to touch him because power went out from him which cured all.